Search our database of lumber manufacturers to find just the right products. 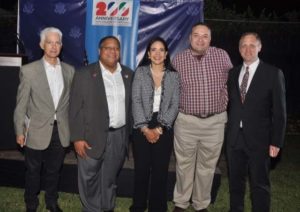 The Southern Forest Products Association’s relationships with the USDA Agricultural Trade Offices (ATO) around the globe are key to promoting and expanding the use of Southern Pine worldwide. That’s why it was an honor to have SFPA and American Softwoods Latin America representative Fernanda Vale attend the 20th-anniversary event and reception for the ATO’s Monterrey, Mexico, location November 9-10, 2022. The reception gathered USDA cooperators that have collaborated with the ATO over the years while reconnecting with American Softwoods’ contacts in Northern Mexico.

The Monterrey ATO anniversary celebrated the October 4, 2002 opening of the location, which represents the northern and border states between Mexico and the U.S. It’s located two hours from the Laredo-Nuevo Laredo crossing, where nearly 70% of U.S. agricultural products cross into Mexico.

Dan Archibald, director of the ATO, gave the welcome remarks and showed a video of Jeanne Bailey, a past ATO director, who opened the office two decades ago. Dan also gave diplomas to the ATO staff in recognition of their work promoting and collaborating with cooperators to increase U.S. agriculture exports to northern Mexico. AMSO was well represented with a banner at the event’s entrance to showcase the different applications for U.S. softwood lumber and structural panels.

“Being present at milestone events such as the 20th anniversary of the USDA’s Agricultural Trade Office in Monterrey strengthens relationships SFPA and American Softwoods have established with in-country trade representatives. As a significant importer of Southern Pine lumber, maintaining a connection with the local ATOs help keeps international trade of wood products from our members flowing.”

Attendees of the event, held at the residence of the U.S. Consul General Roger Rigaud, included Rodrigo Elizondo, CEO of Forestal Sierra Madre, which is a Monterrey-based importer of structural panels, Southern Pine poles, and treated Southern Pine. Forestal also manufactures pallets and sells them in the northern states of Mexico.

Fernanda met with Rigaud and Jonn Slette from the Mexico City ATO about AMSO’s activities through the years in Monterrey and Tijuana, as well as its target markets, strategies, and upcoming activities. She also talked with the ATO’s Luis Chavez about leading an educational seminar next year in other northern states, such as Chihuahua, to address the rising interest in structural panels, Southern Pine, and provide education for those in the pallets/packaging sector.

Get the latest industry news delivered straight to your inbox when you subscribe to the SFPA Newsletter!